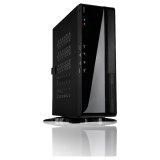 This ITX case has a perfect desktop size, in between the too-thin ITX media cases that require low-wattage parts, and the too-large ITX cube cases designed for gamers. It is about the size and shape of a very thick book, with one tenth the volume of a typical micro-ATX minitower or cube. It is tall enough to accept standard Intel coolers for retail cpus, and well enough ventilated to need no other active cooling. It is great for stuffing the essential components of a standard desktop machine into a tiny yet quiet system, with no loss of performance. It costs only a little bit more than the cheapest build, using a near-empty micro-ATX tower.

Most very small machines are limited by heat issues to using slow low-wattage cpus such as Atom or Bay Trail, or using small and hence very noisy fans. This machine uses standard desktop cpus up to 65 watts. It has about 47mm height available for cpu coolers, and so it accepts Intel's stock down-blowing coolers that are 45mm tall. The case is so well ventilated that the fan does not need to push hard to move plenty of cool air around the entire interior at low speed. It's good that the fan makes little sound, because there is only a thin mesh grill between that fan and your ears. You can sort of see inside the system as if there was a smoked glass window, so be tidy with your wires.

Systems built with this case can be mounted on the back of some heavier monitors, or sit separately on the desktop, or be tucked out of sight. But I found it to be too heavy and slightly too large to hang on my newest LED monitor.

There are two versions of this InWin case. The BQ656T.AD120 has an internal 120watt PSU of proprietary size and shape that fits entirely into the case. It has its own little noisy fan and a metal box that channels or blocks air flow. InWin's replacement psu can be purchased online.

The BQS656.DD120 case has instead a laptop-style 120watt PSU in two parts: an external 120watt power brick that sits on the floor that converts A/C to 19v DC, and a small naked circuit board inside the main case. The brick dimensions are 6 x 2.5 x 1.5 inches, AcBell model AD7041. It remained cool during my load test. Contrary to some reviewers on NewEgg, I did not notice any whine when the PC was off.

I chose the external adaptor case, under the theory that less power-conversion heat would be dumped into the case, and the single large cpu fan would be quieter and maybe more effective in cooling the remaining PSU components than the fast little fan inside the AD120 PSU. The external adaptor also reduces the weight when mounting on a monitor.

The InWin case has room for ram sticks with fancy tall heat spreaders. But you don't need them.

The InWin case has room for a short low-profile PCIe card. But you must use the case's knockout port instead of a normal bracket. The card will block airflow from the cpu cooler, so you should pick the AD120.

The case has room for an SSD and for either a slim DVD drive or a second 2.5" disk. I did not need an internal DVD or big disk capacity. If you install a second disk, you'll likely need to buy a splitter for the power wires. SSD and drives are located in a second thin cavity under the motherboard, where they never get hit by the warm air from the psu. They are cooled by natural convection, no fans.

I did not find any aftermarket coolers that would fit and be any quieter or more efficient than Intel's stock coolers. The available alternatives are much shorter, designed for tight 1U-high cases. I think their cramped heatsinks or fans would do less well than Intel's larger (standard) size.

This case's power and cooling handles 54 watt cpus very well. InWin says it supports 65 watt cpus too. At normal web-browsing load, the reported cpu temp reached 38 degrees centigrade, and the motherboard (H97 chipset) reached 36, with the fan running quietly at 1400rpm. This was in a room at 23 degrees ambiant. I could begin to hear the fan sound from 12" away (facing the case's large grill). I then used overclockers' prime95 burn-in test to apply a high load to all cores. This drove cpu temp to 73 degrees and mobo to only 41 degrees, with the cooler fan maxed at 2500 rpm. The sound was low and pleasant; I could begin to hear the low fan hum from 3ft away (on the grill side). The down-blowing cpu fan is effective in moving air throughout the case to keep everything from overheating. The exhaust air from the cooler still felt cool, as did the ram sticks. The chipset's small heatsink felt somewhat hot but not painfully hot.

Most of the waste heat comes from the psu board, not from the cpu, ram, or chipset. The psu heat blows out from the lower end of the large grill. InWin makes no claims about the conversion efficiency of this psu. I think that could be done much better.

The system runs somewhat cooler and with slower cpu fan when the case is lying on its side, grill side up. I think because the psu's waste heat escapes easier. If the grill side panel is removed, temps and fan speed go a bit lower. So even this large grill is somewhat constrictive.

The case comes with an X-shaped plastic base that is used either as a monitor VESA mounting plate, or as a stubby pedestal when the case sits by itself.

When not on a monitor, the case can sit with the large grill side facing left, or up. The grill must not be covered; no stacking. When on a monitor's backside, the grill faces away from the monitor.

My completed PC using this case weighs 4.6 pounds. This was too heavy for stable use on my newest LED-backlit 24" monitor, which weighs only 5.5 pounds. The PC's weight and leverage pulled the monitor backward on its swivel, messing with the preferred viewing angle, and sometimes causing it to tip over entirely. The PC did mount successfully on my older 14-pound 24" LCD monitor.

Mounting the PC works better on monitors whose connection jacks are on the bottom, pointing down, rather than on the back, pointing back. And some older monitors lack the needed VESA mounting holes.

The PC can be mounted on the monitor with any of the PC's four smaller sides facing up. After experimentation, I think the best orientation is with the PC sitting the same way it would on a desktop. This makes the PC's back connectors accessible, and makes best use of the case's top cooling vents. If the PC covers some of the monitor's connectors, this may be helped by having the PC's front face upwards. The case is slightly shorter this way; the back connectors face is 3.75 inches below the center of the VESA mounting plate. But this has the DVD tray open straight up.

With a system this small and close, excess lengths of power and connection wires look untidy. I used a wireless keyboard and mouse and a 3-ft hdmi cable, leaving just the power lines to tie up neatly.

The DD120's power conversion efficiency seems low to me.

The glowing blue power LED is way too bright. The Asrock mobo utilities include a way to totally disable that LED, but then it is quite hard to know if the PC is on or booting. My alternative was to dim that light with masking tape and black marker. One layer was perfect.

The 19v power cord has a elbow joint where it connects to the case. The cord itself plugs into the elbow joint with yet another friction-fit connector of a different type, and it is too easy for the cord to pull loose from that joint. I've accidentally pulled the plug several times when turning the case around. This problem can also be fixed by tape.

The case came with inadequate documentation for how to set it up; just some faint busy pictures and no words. I recommend this case only for people who have previously built with some larger case.

One reviewer has wished for a dust filter on the main intake grill. I think this would be counter productive. The grill is already a very fine mesh that will snag most dust fuzz. Any filter pad would greatly increase the air drag on the cpu cooler and increase its work and noise. To reach this system's power button and jacks, this system is likely to be placed on top of the desk or monitor, rather than down at the dustier floor level.

The Antec NSK 110 case is quite similar to this InWin case, but it is not practical for power-desktop replacement. Its 90w PSU is not sufficient to run 54watt cpus, and its plastic case and ungrounded grill leak EMI electrical noise.

HP and Dell are now selling tiny complete desktop systems that are half the volume of the InWin case. They use proprietary cooling designs to save space. But they do not offer fast cpus in their current models, probably for cooling and noise reasons.

The Gigabyte BRIX and Intel NUC barebone systems are tinier yet, but cpu choice is again very limited, and they are relatively expensive once ram, ssd, and OS are added. I wonder how they sound.

I like how the InWin case is small and quiet but still gives the freedom to pick among standard components for the right personal tradeoffs between speed, cores, capacity, quietness, and price. As a standalone box, it is a winner; I hope to see more cases like this. As a monitor-mounted box, it works only for some older monitors.